‘Cannibal Holocaust Toyconosaurus’ by Toy Terror.
“The T-Con that goes all the way!”

This T-Con commission is inspired by the classic 1980 Italian cannibal film directed by Ruggero Deodato. The film tells the story of a missing documentary film crew who had gone to the Amazon to film cannibal tribes. Cannibal Holocaust achieved notoriety as its graphic violence sparked a great deal of controversy. *I do not condone or support the themes of the movie itself.*

It’s not for the faint hearted and I wanted to capture the key elements of the movie which it’s so well known for.

First and foremost for the skin and skeleton, I wanted to capture the smokey, ash blue that the tribesmen are smothered in and take it up a notch. This is complimented with a tribal headdress created from unwoven thread, that’s been dyed with a mixture of paint, ink and tea. Around the neck of the T-con is a trophy necklace comprising of two-dozen individually sculpted and hand-painted human skulls. For a movie like this, how can I ignore the gore and guts?! And as instructed, I went to town on tearing open the T-Con to expose the gruesome insides, flesh and bone! A true gorefest! A true toy terror! 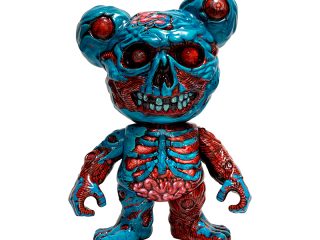